‘A model of scholarly research, Pierre Cochereau’s legendary career is extensively recounted and the influence forming his mature style as an improviser and composer expertly documented.  The post- 1955 history of the Notre-Dame organ is by far the most accurate account in print today.’ 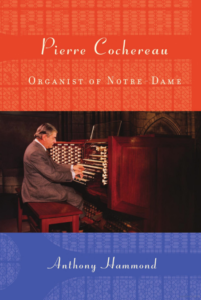 Buy a copy of Pierre Cochereau: Organist of Notre-Dame

Described by his teacher, Marcel Dupré, as ‘a phenomenon without equal in the history of the contemporary organ’ Pierre Cochereau (1924-1984) was Organiste Titulaire of Notre-Dame de Paris from 1955 until his death, at the age of just 59. He was one of the twentieth century’s greatest ambassadors for the organ, pursuing an international recital career which took him all over the world. Although famed as an interpreter, principally of the works of Vierne, he was best known and is best remembered for his incredible skill as an improviser. In this discipline he was at his most inspired and crowds flocked to Notre-Dame from all over the world to hear him improvise both liturgically and in concert.

Having studied improvisation with David Briggs and Naji Hakim, Anthony is also one of the world’s leading authorities on the life and music of the legendary Pierre Cochereau. After receiving his PhD. from the University of Bristol, for his research, in 2012 the University of Rochester Press published Anthony’s new book on Pierre Cochereau, the first full length English language study of this incredible musician, written with full assistance and support from the Cochereau family and former colleagues.

The format is agreed with the host and takes the audience through the life and work of this great musician, including discussion on his improvisation and interpretation.

When combined with live performances of transcribed works, Anthony is able to transport the audience into Cochereau’s world, showing them, rather than simply telling them, about his approach to musical communication.